Description of an item

Description of an item

They'll be ready for the great outdoors in no time with this Reimatec winter jacket. Our wadded design comes with seamed seals to amp up the waterproof finish of the material. The fabric also repels dirt, meaning less laundry for mums and dads. We've added extra-warm insulation that's also super flexible so it won't affect little ones' movement. The detachable hood with a removable faux-fur trim is safe because it comes off easily if caught on anything. It's also designed to give extra protection against wind. Small treasures and keys stay safe in the two zip pockets.

Care instructions: Wash separately inside out. Remove faux fur trim before washing. Close zippers and velcro tapes. Do not use detergents with bleaching agents. Do not use fabric softener. Remove the garment after finished washing program to avoid color change. Tumble drying or drying cabinet allowed (max. 40 °C).

Enjoy the taste of rain!

Reima® overalls have around  6 cm room for growth, allowing base and mid layers, too. If your child is close to 104 cm tall in the autumn and is of a thin or medium body type, a size 104 overall should fit comfortably through the winter. However, kids can grow in spurts, so sometimes a larger size may be a wise choice.

Layering is important when the weather is changing outside. Each layer has its specific task.

*You can easily regulate the warmth of the whole outfit with different accessories. Remember to choose footwear that suits the weather, too!

**The sense of temperature ir individual.

The recommended temperature depends on how you are layering clothes (see in table): 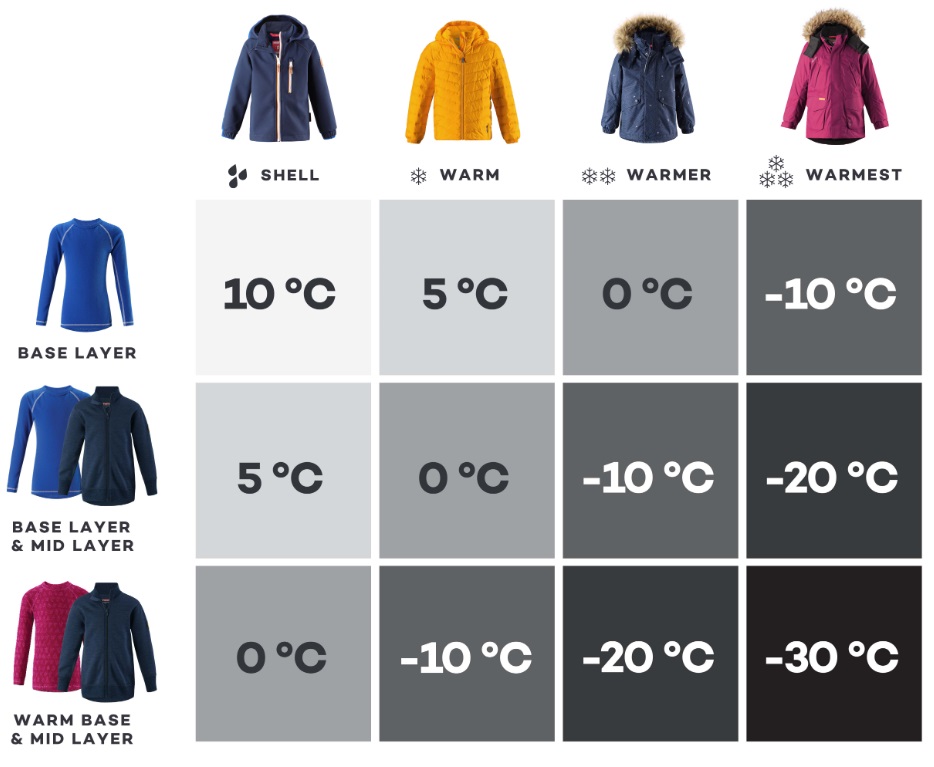 We believe that children were built for an active, outdoor lifestyle. For more than 70 years, we have been working for the joy of playing outdoors and we intend to continue being the world's leading expert in outdoor clothing for children. Travel back in time with us and find out more about our production in decades gone by.

Reima’s roots are in World War II. Pallo-Paita Oy, which manufactured garments for the army, was moved form Helsinki to Kankaanpää in order to be safe from air attacks in 1939. After the bombing ceased the factory returned to Helsinki, but the owners decided to utilize the capacity that remained in Kankaanpää – and the personnel that had been trained. In April 1944, building of the Kankaanpää factory was commenced. The new factory became a company one year later, named as Kankama Oy. In the early years there was shortage of raw materials and the first products, women’s work wear, was manufactured out of old army snow suits.

The company grew and developed strongly in the fifties and the name Kankama (derived from Kankaanpää) was changed to Reima-Pukine. Reima started to develop durable material for children’s wear. The first attempts at export were also made in the 50ies. Enterprises in central Europe did not take off, so the actions were concentrated in Scandinavia.

The Enstex® material was developed at the end of the century and combined durability with water repellence. Product development followed fashion trends.

1970ies was the golden age of Enstex®. The material was the right answer to needs at a time when more Finnish mothers moved from housewives to working life. Focus remained in children’s wear, but also everyday fashions for grown-ups and youth were manufactured, as well as work and sports wear.

In the early 90ies both Reima and Tutta Oy, who made children’s jersey wear in Jyväskylä, were deep in trouble. The company also had a third brand in its stable: Lassie®, which had been acquired earlier. Reima continued product development with the aim of bringing wind- and waterproof properties as good as Gore-Tex. As a result - Reimatec® was developed. Reimatec®, which had excellent price-quality ratio, was launched loudly and proudly in Finland and soon in all major export countries. To remain competitive, Reima centralised its production in China, other far-eastern countries and the Baltic states. In 1997, the company was sold to Danish private equity investors.

With new owners Reima aimed at growth by acquisitions, centralizing its distribution and focussing heavily on technical product development. Massive development actions and company deals quickly weakened Reima’s profitability. The company ran into debt in a couple of years and in 2002 was time for the third big turnover in the history of the company. In 2004 all adult production lines were chopped off and focus was returned to the company’s true target group, children of 0 to 12 years of age. This focusing was worth the effort: profitability was instant and growth has been consistent ever since. Internationalisation also proceeded at pace: in the first decade of the 21st century, Reima's products were sold in almost 20 countries.

The company has about 100 personnel in Tampere and Vantaa in Finland, as well as about 120 abroad. Reima Oy's net sales in 2015 were approximately EUR 75.4 million.

Innovations have been inspired by parents' growing concern for children's health in the digital era: Reima will add a sprinkle of smartness to its clothing, enabling parents to encourage their kids to be active. The ReimaGO sensor and related clothing concept will turn a new leaf in outdoor activities in autumn 2016.

There are no reviews.